Who doesn’t like shiny awards? Let’s face it. In the agency world that award means a lot. And agencies are crying tears of blood to build compelling campaigns to creatively engage with their customers. From cool chat-bots to artificial intelligence, instant apps and amazing mobile experiences, we see a lot of new technology and innovation out there every day.

In such context marketers are progressively changing their approach on how the marketing message is delivered to their audience. In this article we are proud to show how Hardys wine won the Frontier Technology Innovator of the year Award, and how it was possible through the #HardysHero campaign run by Mighty Media Group which leveraged PassKit’s technology.

#HardysHero campaign took place at Heinemann Duty Free store in Sydney International Airport from February 1st to March 31st 2016 and was designed to create an omni-channel experience for Hardys’ customers travelling via Sydney airport. The campaign also aimed to drive recognition of Hardys fine wines, educate consumers about the tasting journey – in particular about Shiraz and Cabernet Sauvignon wines – and to increase online engagement with the brand through prizes and in-store offers.

Created specifically for the travel retail market, the campaign was deployed both in English and Mandarin for travellers passing through Sydney Airport during the Chinese New Year period. The campaign was run by Mighty Media Group and leveraged PassKit’s technology. You can watch the campaign promo video below:

Hardys (Accolade Wine) has won the prestigious Frontier Award for Technology Innovator of the Year, and one of the campaign components was the use of Mobile Wallet. Accolade entered with its #HardysHero digital campaign that was partnered with Heinemann and Sydney Airport, and run by Mighty Media Group.

MMG developed a gamification strategy that had several touch points with the travellers including Facebook, Twitter, Instagram and a microsite with a personality test available both in English and Chinese as a means to start the discussion with travellers. The hashtag for the social campaign was #HardysHero.

iBeacon technology was also deployed inside Sydney Airport to notify passengers at various touch points with lock-screen notifications to let them know they were approaching the tasting section, and to also remind them of their chance of sampling exclusive wines.

NOTE: you might also want to read How Beacons work with Passes

For the full experience, travellers were prompted to add a pass to their mobile wallet. Here’s the invitation page to add pass to wallet (see also image below). 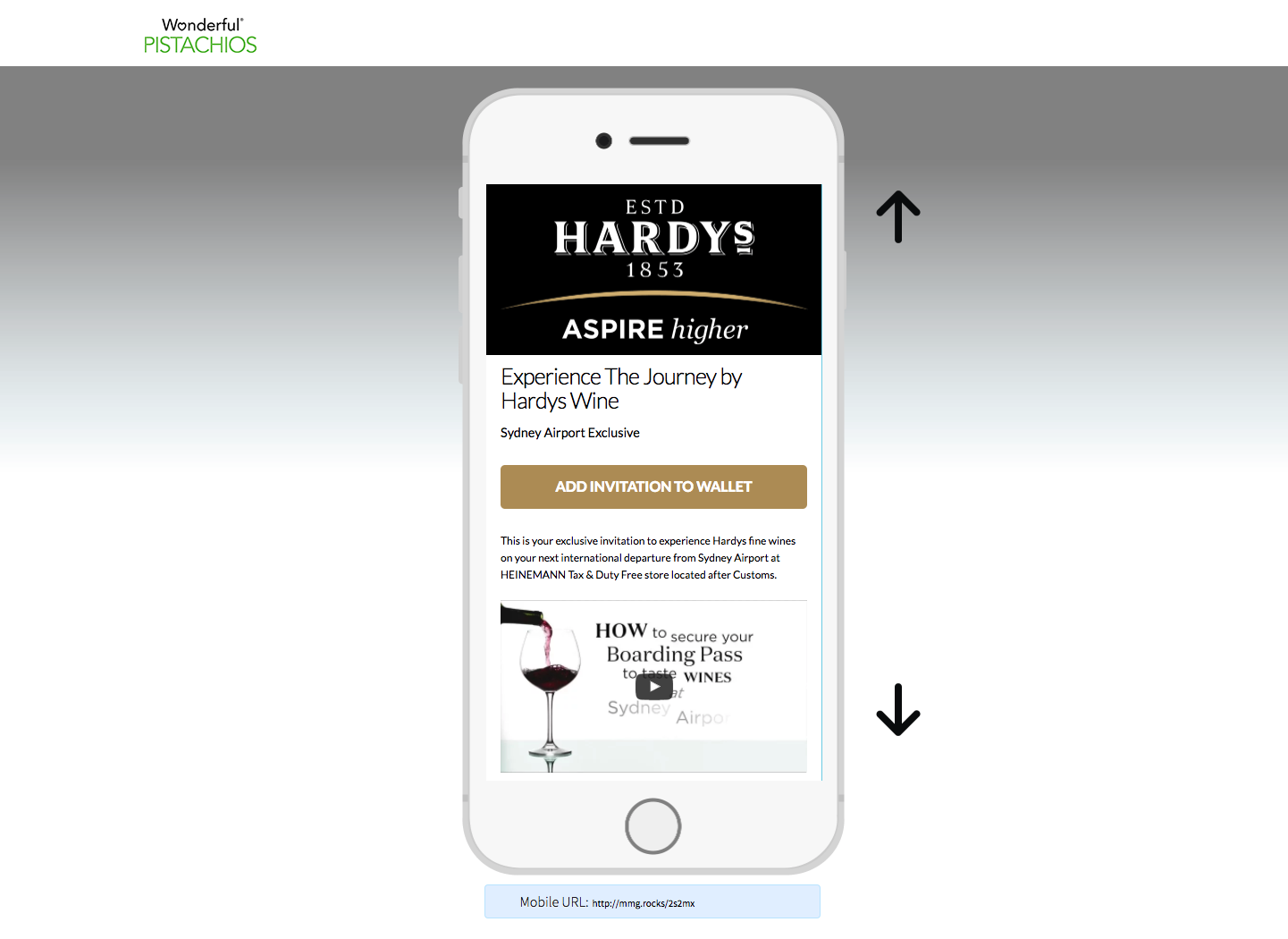 2) Adding the pass to wallet

The following step was to actually add the pass to Wallet. This is how the ‘add-pass’ pages looked like in both languages: 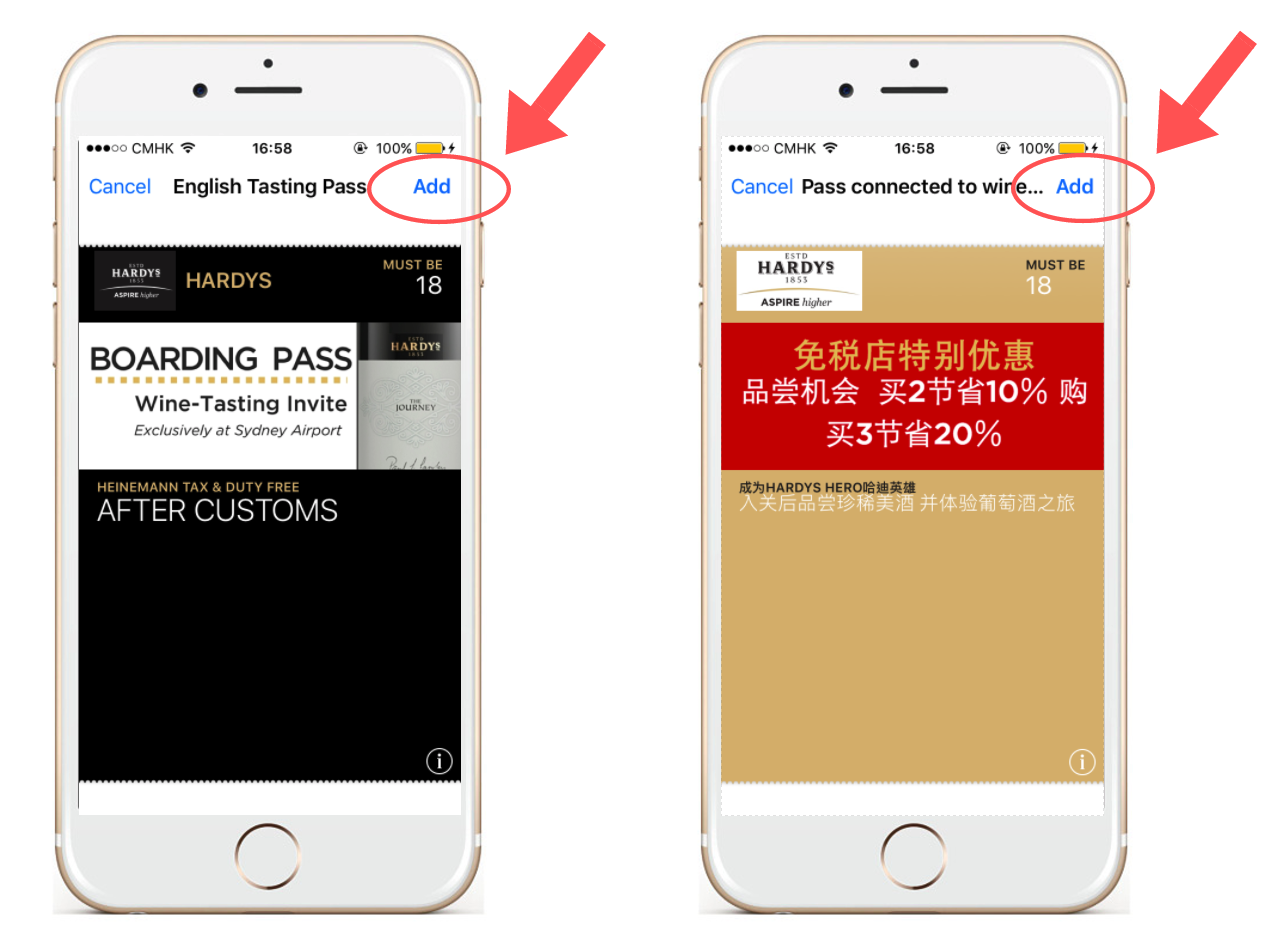 3) Front of the pass

Once the pass got installed this is how it looked in Mobile Wallet (Apple Wallet in the example below). 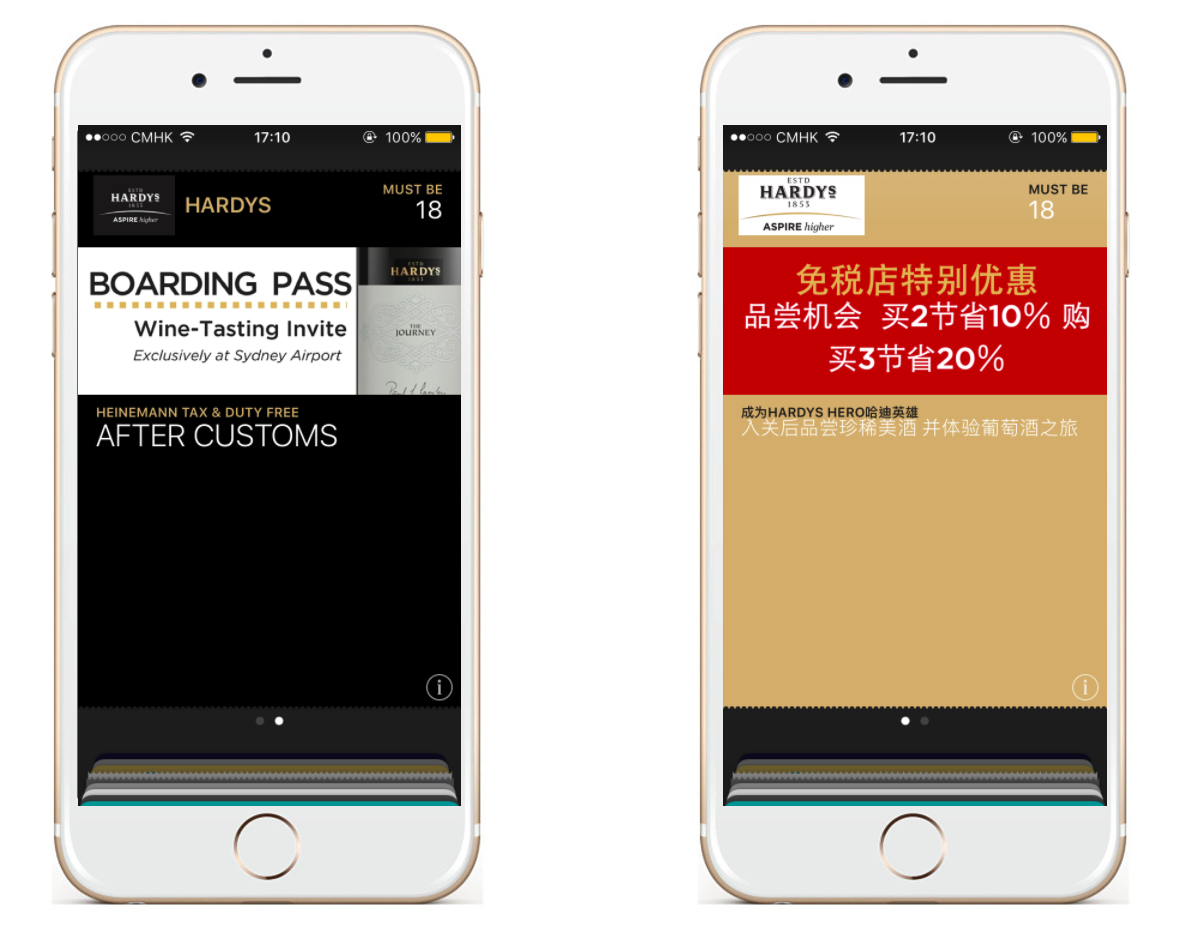 By flipping the pass, customers could find extra info on the back of the card about the campaign, the T&C and legal notice. Here’s a screen both for the English and Chinese version. 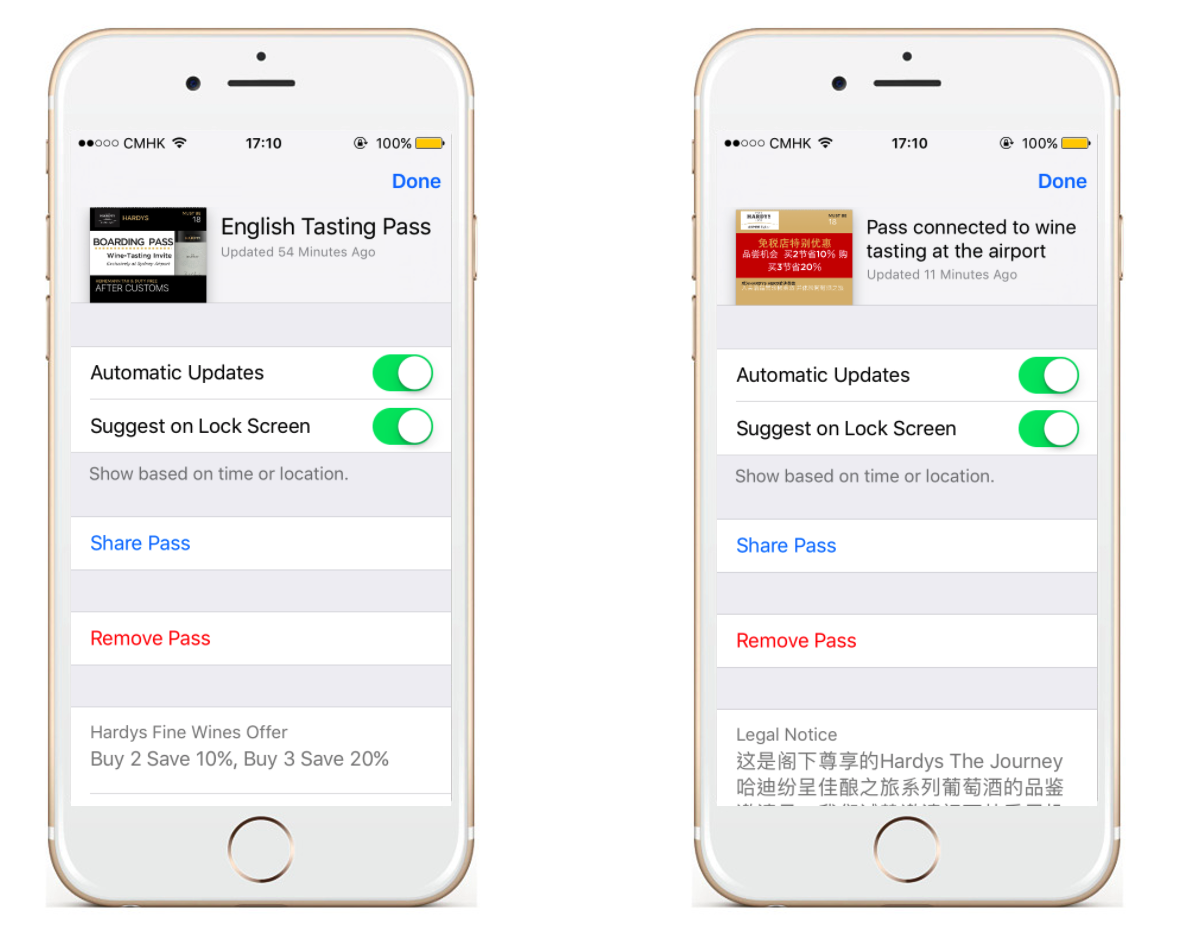 Passes can provide the same experience as an app would, but with passes there is no need to build an actual app as they can be installed in native wallets directly in your phone.

Take a look at Things to consider before developing an app, and why we would not recommend building an app from scratch.

Emilie Munther, Customer Marketing Manager commented: “This was a challenging yet exciting campaign to bring to life, targeted specifically at travellers going through Sydney Airport to engage them with the Hardys wine brand on multiple platforms and ultimately drive sales. It exceeded our expectations and we are delighted that the judges of the Frontier Awards agreed!”

Take a look at our solutions page, or Get In touch with us. We’re very excited to help you and make your business successful.